It’s the end of the Bull as we know it?

An interesting chart of the S&P 500 is making a big buzz on social media. It captured my attention immediately because it led me, and perhaps other readers, to a bearish conclusion. And this is at a time when so many people are second or third-guessing when or if the S&P 500 might take a spill after a long 6-year rally. REM’s song sums up the zeitgeist around this chart fairly well:

It's The End Of The World 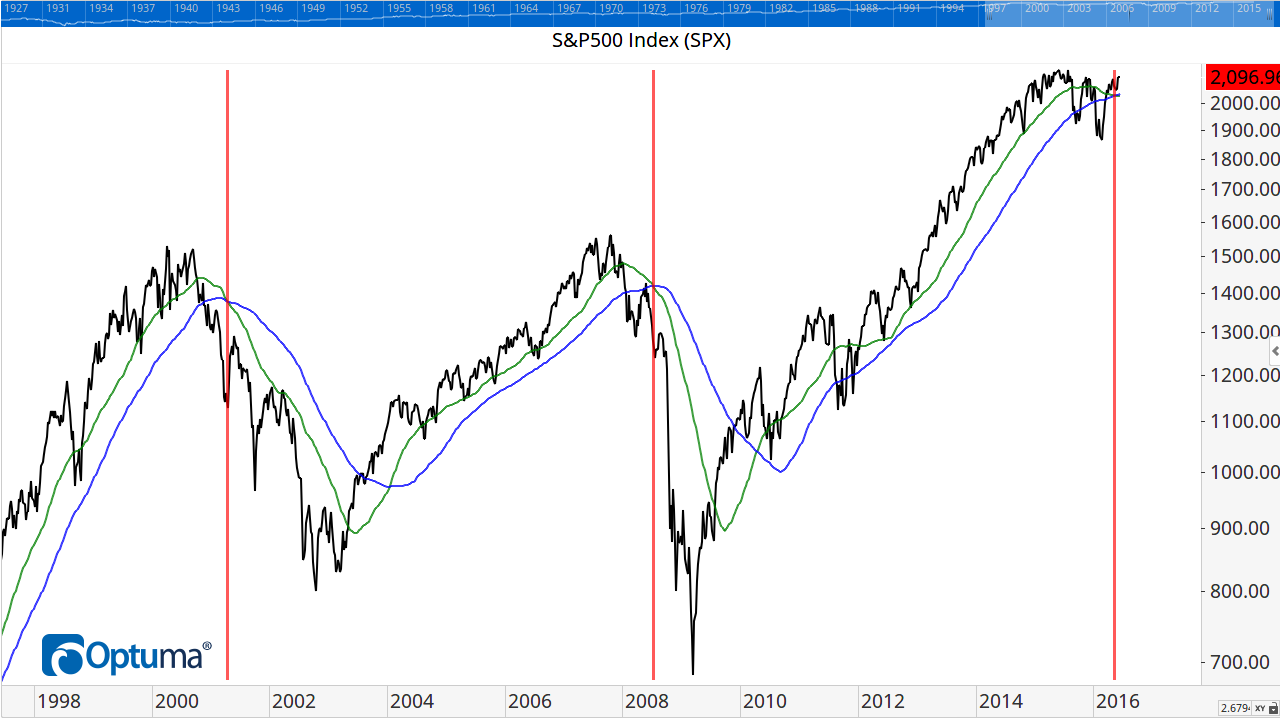 Do you see the conclusion you could be drawing? In a word – “down.” But is this the whole picture? Is there more beneath the surface?

Let’s take a look back as far as we can go on the S&P 500, using Bloomberg data. Below is the chart, excluding the dates from the previous chart. So, here’s everything from the 1930 to the 1980s. This moving average crossover happened 21 times between 1930 to today. What hit me first is this tends to happen after the S&P 500 has already been going down or sideways for a while. Afterall, a moving average is a lagging indicator telling you what has been happening. It’s true, there are times when the market did go much lower. However, I notice the market also made bottoms around this time as well. Hmmmm.

Now that we have some casual observations, let’s look at some numbers and see what else we can discover about this signal. The next chart is the average returns of all 21 times this crossover happened between 1930 up until today. It’s showing 100 weeks before and after the signal, with week 0 being when the signal happened.

Here’s what stands out to me initially. On average, the market has already been headed down for roughly 50-weeks leading into the signal. Also, on average, the market tends to begin bottoming at the time of the signal, and is impressively higher both 50-weeks and 100-weeks looking forward (basically 1-year and 2-years. There’s nothing magical about the numbers 50 and 100, by the way). Let’s look at some of the other enlightening stats.

Here are the stats at 50-weeks after the signal. 65% of the time, the S&P 500 was higher with above average returns. I wouldn’t have suspected that from the first chart – remember 2001 and 2008 – ouch! Since the distribution of observations are skewed, the 80th and 20th percentiles present a similar concept of 2 standard deviations from the mean. So the low end was down -8.74% 1-year afterwards. Next, let’s take a look at the same stats 100-weeks after the signal. The S&P 500 returns were positive the same percentage of the time, at 65% with mean and median returns over 16%. In fact, everything else looks similar, continuing the uptrend from the crossover, on average.

All of this is not what I’d expect from the initial chart only looking back to the mid-1990s. So, we’ve learned a lot of new and potentially useful info here.

The majority of the time, this signal isn’t really bearish. In fact, 65% of the time, the S&P 500 was up 1 and 2-years later. So be aware of the head-fake. But, it is worth noting that 35% of the time it was down and some of those were, in fact, big losers. Diligence seems warranted. But now, at least we have taken bias out and we can look at the stats for more informed decisions.

What could we do next to add more color to what we’re looking at? We could dig into those losers and see if  there’s something that’s different between today’s circumstances and April 2001 and July 2008. That’s certainly a sensible approach.

We should also look at several indexes, like the Dow Transports and the Dow Jones itself, historically as far back as we could go. We could then answer some additional questions. Do all indexes act the same after this crossover signal, or is it just the S&P 500 that behaves like this? I’d like to know that. If it’s broad-based, perhaps it could be applied to other securities, not just indexes.

For fun, I’ve posted the workbook here so you can download and examine it yourself. Perhaps you want to change the moving averages or explore other markets or securities.

I am going to really dig in and explore some of the above questions in a future blog. Stay tuned!

If you would like to reproduce the charts I used in this blog post, download the Optuma workbook and open it in your copy of Optuma.